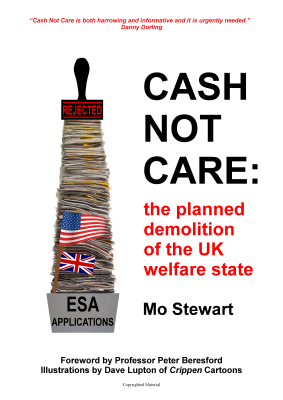 Mo Stewart Is the UK lead researcher and project manager  for the Preventable Harm Project which was completed in Nov 2019 following ten years of independent research has challenged the newly set up commission. It is in itself is a good idea, however  Mo  points out that they have missed a few obvious things. Pushing user led disability ideas to the forefront is commendable and long overdue but are they realistically achievable  given so far no party has shown any great interest in the needs of disabled people in practice, just asked for ideas and what needs changing and then consigned it to the shelves of Westminster to gather dust. Leading academics have already demolished the (WCA) assessment process as flawed .

Read this Submission Below

Mo Stewart Author of Cash not Care and Independant Researcher, who has been a continued supporter of disabled people, being a Disabled Veteran and Health Professional herself, has lashed out at the continued injustice metered out to disabled people via  her ‘Preventable Harm Project’ over the last decade.

In the evidence recently given to the WPSC, the DWP Permanent Secretary celebrated the success of the roll out of Universal Credit (UC).

Apparently, all is well, ‘customers’ are quite happy with their experience, and the Secretary of State uses her much celebrated PhD in science to analyse various aspects of UC that will help people chose their dream job and improve their ‘careers’…. Oh dear….

Now Therese Coffey’s claiming that ‘Universal Credit is the biggest change programme in Europe, and the UK is seen as a world leader in welfare…’

Time for a reality check, so I dropped the Permanent Secretary a line.

Image Courtesy of the The Telegraph

Mo Stewart – Independant Researcher WCA……..After her letter to Mansel Alyward one of the architects of the WCA and  her extensive research and publication of her book Cash Not Care , Mo Stewart has sent a explosive letter to the current Secretary Of State David Gauke. I have been granted permission to use it for my blog. One thing that springs to my mind is I would love to be a fly on the wall when he reads this to see his face. For too long now this government as blagged it way to convince the public it is justified to cut benefits to disabled people. This researcher keeps holding them to account.

This report from Disability Campaigner Gail Ward is a must read for all benefit claimants and those claiming  ‘in work’ benefits claimed by millions in the UK. It has plenty of references and downloads contained within the document and it will alarm many, it should, as this government is targeting the poorest in society at the expense of saving the rich. Some of those already transferred will know the horrors already highlighted recently by Citizens Advice (CAB),but the majority do not. This blog doesn’t have the capacity to embed the entire report to enable reading online ,but you can download it from the link below in the hope that this will help many prepare for the next onslaught by this barbaric government whose sole purpose is to hound claimants, and save money for the state putting profit before people. If you thought WCA (ESA) was bad this will make it look relatively tame. Toxic Atos are again having to rebrand claiming

Following an independent review of the PIP assessment journey claimants experience in December 2014, Paul Gray recommended a number of changes to claimant communications to the Department for Work and Pensions (DWP) and Assessment Providers.
After consultation with DWP and reviewing our communications, we have introduced a new business name that better represents the work we do independently assessing PIP cases.
We believe Independent Assessment Services does this because: • It makes it clear that we are ‘independent’ providers, distinct from DWP • ‘Assessment’ explains the service we deliver assessing PIP cases more clearly than ‘healthcare’ does

It can rebrand as much as it likes, it  doesn’t stop the DWP destroying disabled people’s lives when being assessed and losing their money,  vehicles, jobs when they fail to be assessed correctly and leaving some so distraught their health actually deteriorates or they lose what income from working they had , and the worst case scenario is they are left housebound  when they lose their mobility vehicles.

The stories are now coming thick and fast towards those contractors, which Atos is one, of lies and malpractice of assessors. Capita is the other contractor whose reputation has also been tarnished badly .

65% of decisions are now being overturned on appeal, some just give up because they genuinely cannot cope with their health conditions and the long protracted process that it entails and the loss of vital income which helps with the extra costs they face as disabled people. Recently those with mental health were asked ‘why they had not killed themselves yet’ ! Reports given to DWP in a lot of cases are filled with fabrication, claim claimants.

One the eve of election night many are scared witless by these assessments praying to god that Labour are installed into Number 10 who have promised to scrap these assessments along with the notorious WCA assessments which Atos used to carry out until they left their contract early leaving Maximus to pick up the pieces.

Either way these assessments are going the same way,  should Labour get power this will need to be tackled head on to prevent serious preventable harm to those whom are struggling under the last 7yrs of horrific reforms to survive. Many thousands have died along the way, with Atos and the DWP blaming each other, but the blame lays fairly and squarely at the governments door for a badly thought out policy decision that has affected the disabled community on a grand scale, while blaming disabled people for being workshy,lazy , and faking disability which the general public have latched onto and left the disabled community easy targets of Hate Crime. Disabled people do not mind having a fair assessment given the public purse is helping them live independently, what they object to is being hounded to their graves and every waking moment being made scapegoats for a failed government policy that was only ever going to cause harm and they did not even have the decency to step in and stop this happening. The enquiry into PIP (Personal Independence Payments) was conveniently called off due to the fact Mrs May called a snap election in the hope of continuing these awful policies to cut the welfare bill of those they promised to protect.

The disabled community has been hit 9 times harder than any other section of society, for the failure of a society who no longer care, a department who is determined to put saving money over human life of a community that takes the least of the welfare budget.